Bless Me, Mother, That I May Apply the Dye: Henna Traditions in the Balkans

Hi henna blog readers! I know it’s been a while — the beginning of my PhD program has meant that I’ve been even more busy than usual… I’m super excited to be teaching about henna at HennaCon this coming weekend! I’ll be giving three lectures: the history of henna, the use of henna in ritual, and a special “Mythbusters: Henna Edition.”

But in the meantime I got a great question on my tumblr recently about henna in the Balkans, and you know what that means — new blogpost!

So let’s start with defining where we’re talking about: a large peninsula in southeast Europe, from the Black Sea on the east to the Adriatic on the west, including Albania, Bosnia and Herzegovina, Bulgaria, Croatia, Greece, Macedonia, Serbia, and even parts of Slovenia and Romania.

Some of the earliest records of henna in the ancient world suggest that it was known in this area, at least to the Greeks: descriptions of henna appear in the writings of Greek scholars and botanists including Theophrastus (ca. 371—287 BCE) and Dioscorides (ca. 40—90 CE).

While the best henna was grown in Egypt and the Levant, the Roman historian Pliny (ca. 23—79 CE) notes that it was also grown in Cyprus, the island with which it shares its name in Greek (kupros)… Artistic depictions of women with red hair support the theory that it was known as a hair dye on the mainland of southeastern Europe.

But after the classical age, it seems that henna fell out of use... As far as I can tell, henna was not used in the region during the Byzantine empire, which would mean that the use of henna in the Balkans was reintroduced with the Ottomans, who began expanding their empire from Turkey into southeastern Europe in the 14th century. The Ottomans, of course, had already developed some of the finest henna traditions of the Islamic world. Depicted in miniature manuscripts, and mentioned in Ottoman poetry, henna (known as kina in Turkish) was not only an important cosmetic for the hammam, and a part of pre-wedding ceremonies, but also a major economic export for various communities around the Mediterranean basin.


Meanwhile, Sephardic Jews brought their own henna traditions with them when they arrived in the Ottoman Empire from Spain in the early 1500s; even if the form of the ceremony eventually evolved to closely resemble that of their neighbours, they still called it by its Old Spanish name la noche de alhenya (לה נוצ׳ה דה אלחיניא). Henna was sent to the bride as part of the bogo de banyo, the ‘spa package’ given by the groom’s family containing towels, soaps, combs, candies, and all other necessary accoutrements.

The henna was applied in the hammam; unfortunately none of the sources describe patterns, but indicate that the henna was done solidly on the fingertips or over the palm. But the geographic range is impressive... We have records of Sephardi Jewish henna ceremonies not only in Greece and Turkey (explored more thoroughly in this blogpost), but also throughout Macedonia (Luria 1930, Lebel 2008) and even as far north as Bulgaria (Moscona 1970, Leibovici 1986)! And don't forget the henna traditions of Jews in the Crimean peninsula (both Karaite/Karaim and Rabbanite/Krymchak) described here.

Another minority ethnic group in the Balkans to use henna were the Romani people — I’ve already described the henna traditions of Roma in the Balkans in this blogpost. To summarize, henna was used (both as a regular cosmetic and for weddings) by Roma throughout Bulgaria, Serbia, and Macedonia. The henna ceremony, like in other communities, is an occasion for much celebration, and of course singing and dancing; there are also some rituals unique to the Romani henna ceremony, including women putting sugar in each others’ mouths and squeezing milk on the bride's head.

But henna was not restricted just to minority communities like Jews and Rroma. From the 18th to the early 20th century, henna was also regularly used in the Balkans by local Christian and Muslim communities. For example, Lucy Garnett describes the cosmetic routine of Albanian women (1891, pg. 221):


“Albanian ladies appear to be even more addicted than Osmanlis [Ottoman Muslims] to the use of cosmetics… No sooner are they married than they begin to dye their hair with a decoction made from gall-nuts and palm oil, paint their eyelashes, and extend their eyebrows till they meet over the nose… They redden their lips and cheeks with iris powder or carmine, and stain their nails and the palms of their hands with henna.”

Other descriptions provide similar accounts of Greek, Albanian, Macedonian, Bosnian, Bulgarian, and other Balkan women dyeing their hair and hands with henna (e.g. Mackenzie 1877, pg. 118; Blunt 1878, pg. 83; Holbach 1910, pp. 33 and 85). It was used not only as a cosmetic, but also medicinally — applying henna paste mixed with garlic to the hands and feet was believed to bring down fever (Kemp 1935). One author records in 1906 seeing an Albanian girl returning with her father from the hajj [pilgrimage to Mecca] with her hair and fingernails dyed with henna (Moore, 1906, pg. 137). The most important use of henna, though, was during the bride’s preparation for marriage, and it was usually given to the bride by the groom’s family in a package with sweets and other bath items, like among Sephardic Jews.

For example, in Edessa in northern Greece, the wedding basket contained “sugar plums, henna, rouge, soap, &c., and a large jar of wine for her parents” (Garnett, 1890, pg. 78). In the village of Samarina, Macedonia, the gift basket was known as ghalika among the Vlach, an ethnic group also called Aromanians (Wace and Thompson, 1914, pp. 111-112):


“When the groomsmen, bridesmaids and musicians are all assembled they go with the bridegroom’s gifts to the bride, a ceremony which is called taking the ghalika to the bride. The ghalika is a low, broad basket in which are placed the gifts, a veil, tinsel strips for decorating the bride’s hair, scents, henna, brooches, combs, mirrors, soap, a handkerchief and sweets… On the Saturday evening the women, but especially the girls of both families, put henna on the nails and palms of their hands, and this is also done to the bride.”


The application of henna to the bride’s hair and hands, like everywhere else, was accompanied by much singing and rejoicing. The words of one Macedonian song for the henna ceremony were recorded at the turn of the 20th century in Kavala — it is written as a dialogue between the bride and her mother, a common theme in henna songs (Abbott, 1903, pg. 157):

“Bless me, my dear mother, that I may apply the dye. /

You have my blessing, my dear child: May you both live and prosper. /

If my brothers were in life, Oh, what a rejoicing would there be! /

If my father was in life, Oh, what a rejoicing would there be! /

May my mother be well, still a rejoicing there shall be!”

Abbott observes in a footnote that “it need not be supposed that her father and brothers are really dead,” but rather that the tone of the song was meant to convey the mixture of joy and sadness that is characteristic of lifecycle ceremonies of passage.

In general it seems, unfortunately, that henna — whether for a bride or for ordinary use — was not done in patterns but rather a simple stain on the fingernails and palms. BUT there are a few photos that do demonstrate a tradition of henna patterns in the Balkans... In 1940, the Albanian artist Fadil Pullumi (Pëllumbi) did a series of watercolour paintings, based on postcard photographs, of traditional Albanian sights and landscapes, and he included one of a girl with hennaed hands in Dibra, a mountainous region straddling the border between Albania and Macedonia (you can see the original postcard photo here):

I have also found a few amazing photos that show henna patterns for Gorani brides! The Gorani people are a Slavic Muslim ethnic group living in the Gora and Kosovo region (just north of Dibra), and they are well-known for their tradition of elaborately painting bride’s faces with delicate patterns in blue, white, and gold. 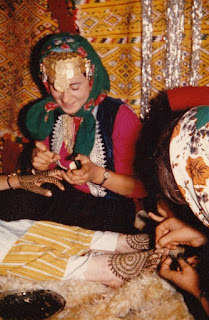 In these photos, taken in 1966 in the village of Brod (Kosovo), a group of women are shown painting the bride’s hands and feet with henna patterns, using what look like small matchsticks, with a large bowl of henna resting next to the bride's legs. The caption notes that the women applying the henna are known as knarice in Našinski, the Gorani language, from the word kna, henna.

All these patterns appear to be composed of hatched lines forming large circles/suns on the tops of the hands and feet, with zigzags and herringbone across the fingers and toes... They are intriguingly similar in both placement and design to traditional Balkan tattoo patterns (see more here). There is also some resemblance to the patterns of traditional Balkan weavings, such as the beautiful kilims visible in the background behind the bride... In another undated photo, also probably from the mid-20th century, a Gorani bride is shown in her headdress with visible henna stains in a similar pattern.

This is a fascinating glimpse into a beautiful tradition! And so many questions remain: How variable were these patterns? Were henna patterns once used by other Balkan groups outside these regions, and if so, what did they look like? Do the motifs used in henna share any symbolism with tattoo patterns? If anyone has any sources that shed light on this, you know where to send them! But at the very least we now have evidence of one surviving tradition of henna patterns in the Balkans, and from the looks of it the henna patterns are deeply intertwined with other forms of Balkan visual culture.

While henna is still done in the Balkans today, most groups (other than the Gorani) simply put a dot in the centre of the palms. No doubt the decades of secularization, urbanization, oppressive communist regimes, and bloody ethnic conflicts have prevented the transmission of many of these traditional practices. Hopefully younger generations feel empowered to recover and record their family's heritage and continue to celebrate with the blessing and rejoicing that henna once symbolized. In the meantime, I hope you enjoyed this exploration of Balkan henna traditions, and I look forward to more questions!

In some Pomak/Balkan Muslim communities, the modern practice is to put a single dot of henna on the back of the hands.