March to Your Own Drummer: The History of Hennaed Drums (Part One)

I have a friend who is a musicologist specializing in Sephardic music, and for months we have been trying to arrange for me to henna some of the drums in her extensive collection. So far we have failed to successfully co-ordinate it... So in lieu of hennaed drums, I offer her this blogpost series about hennaed drums; hopefully we’ll be able to make it happen in reality soon!

The ultimate origin of hennaed drums is probably impossible to find definitively. Wherever people were using henna on skin, and had drums, it would be a logical extension to decorate your drumheads with henna. Drumheads will stain beautifully — they are skin, after all — and the colour will be deep and permanent (since the animal’s skin is no obviously longer growing).

Some of the earliest records, to my knowledge, that may allude to hennaed drums are from al-Andalus, the medieval kingdoms of the Iberian peninsula (today Spain and Portugal). While I have not been able to find any textual references to hennaed or decorated drums, a number of examples of medieval art, both Jewish and Christian, depict drums that have designs on the membrane.

The subject of the paintings is often the prophet Miriam dancing and singing with the women after the crossing of the Reed Sea. As is common in medieval art, although the events depicted took place in another time the characters are depicted as if they were living in the contemporary period — the clothes, instruments, and other objects were shown as recognizable to the viewers, as a way of drawing a direct link between the events of the Exodus (for example) and the celebrants at a Passover seder in 14th century Catalonia. “In every generation,” we read in the haggada [Passover servicebook], “one must see themselves as if they had themselves left Egypt.” 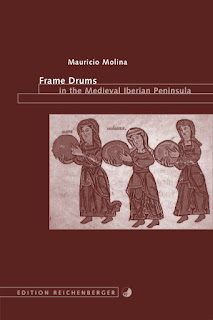 The drums shown are handheld frame drums, known as adufes or panderos in Spanish (tympana in Latin, tof in Hebrew, and duff in Arabic). They have a long history in the Iberian peninsula, and are deeply linked with religious ritual and symbolism in local Christian, Jewish, and Muslim communities. It is especially associated with women, and in artistic iconography the frame drum is associated with Miriam in particular.

To learn more on the symbolism of the frame drum in medieval Iberia, check out the extensive work of Mauricio Molina (e.g. 2007 and 2010). The frame drum’s importance continues for contemporary women in Spain and Portugal, as well as in the Middle East, as shown by Judith Cohen (2008) and Veronica Doubleday (1999). As Cohen writes, "perhaps [for contemporary Spanish and Portuguese women] playing the adufe and singing is an affirmation — for themselves, for each other, and maybe for the community as a whole — of their strength: physical, emotional and aesthetic."

This past weekend marked the 2-year anniversary of this blog! It’s hard to believe that I’ve been blogging about henna for 2 years. In honour of this milestone I thought I’d share some fun statistics and search queries from the past 2 years… Thanks for accompanying us this far! 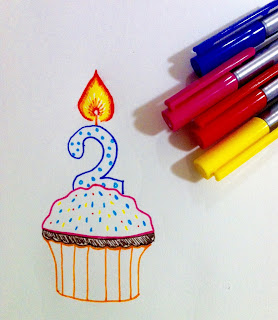 In the past 2 years, I have researched, written and posted 59 posts (this one is the 60th — and there are four finished draft posts coming in the queue!), which averages out to 2.5 posts every month. Not bad! In total, not counting this post, I’ve written over 86 thousand words (86,288 to be precise) of henna research on this blog, which would come out to roughly 153 single-spaced pages in Times New Roman 12… Practically a whole book's worth!

The most popular post (by pageviews) is actually not a henna-related post but this post about Ethiopian Jewish tattooing traditions; the most popular henna post is this post on Persian henna in the photographs of Antoin Sevruguin. The majority of my blog readers, unsurprisingly, come from the US and Canada; but thousands of readers have also found my blog from France, Russia, Germany, the UK, Israel, Morocco, India, Greece, Indonesia, Ukraine, and Australia. All in all, over the last two years, my blog has been viewed over 40,000 times.

Read more »
Posted by Noam Sienna at 5:12 PM No comments:

Seen in the Yemen: Visiting a Yemeni Henna Artist, 1938

Apologies for the long break with no posts! The end of the semester and the deadline for my thesis, combined with my move, ate up every spare minute of my time. Hopefully now I'll have time to return to more regular blogging.

I’m settling into my new apartment in Minneapolis, and I’m especially grateful for the warm welcome I’ve received from the local henna artist community. I’ve already had the opportunity to work alongside some wonderful artists here and it’s been great to build community together. In appreciation, I thought I’d post this lovely and fascinating story about a visit to a henna artist in Yemen in the late 1930s. I think it’s so important for henna artists to feel a connection to their artistic predecessors, and to recognize that our involvement in this art comes with a long and rich historical legacy.

The source of this story is Freya Stark (1893-1993), a British-Italian traveller and writer who bravely trekked through the deserts of western Iran and southern Arabia alone (at a time when few women would do so), as well as travelling extensively through Syria, Iraq, Egypt, Greece, and Turkey. She accompanied the British archaeologist Gertrude Caton Thompson and geologist Elinor Gardner on their 1937-1938 expedition to the Hadhramaut in south-eastern Yemen. Her account of visiting a Yemeni henna artist comes from the published diary of her travel, A Winter in Arabia (1940).

In February 1938, Stark writes, she was in the village of Huraidhah, just in time for ‘Eid al-Adha, the great feast celebrating the near-sacrifice of Ismail and the return from the pilgrimage to Mecca. Of course, any holiday must include some henna, and Stark wanted to join in. She had her hands hennaed by a local artist named ‘Ayesha, who is called “the best beauty specialist of the town.” Stark, as a honoured European visitor, was hosted by the local notables and social elite, and ‘Ayesha was apparently henna artist to the stars — Stark finds her at the house of the family of the local mansab (the position of mansab was an office of tribal leadership whose authority is both social-political and religious, due to their claims of descent from the Prophet).