A couple of my dear friends have moved into a new house (just down the street! yay!) and asked me if I would do henna at their housewarming party… Little did they know that henna housewarming parties are actually an old Jewish tradition! 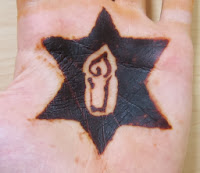 But what does this have to do with Hanukkah? Well, the holiday takes its name from the fact that the Temple was rededicated after the victory of the Maccabees: in Hebrew, hanukkat haBayyit, ‘the dedication of the House’ (which in modern Hebrew now refers to any housewarming).

So while I have never come across any specific henna traditions for Hanukkah in my research, there is a Jewish custom connecting henna with housewarmings, so I thought I’d present it here.

The use of henna in connection with moving into a new house was fairly common among the Jews of North Africa, although I haven’t found any mention of it among other Jewish groups. The earliest mention of this custom that I’ve found is in the writings of Rabbi Yosef Messas (1892-1974), a well-known North African rabbi born in Meknes who served in Algeria, Morocco, and eventually Israel. Upon his arrival in Tlemcen, Algeria, in 1924, he recorded the following (Zafrani 1969, pg. 123):

When an individual rented a house or shop, he would not move in until placing a small pile of henna, about a handful, in the four corners of the building, and lighting four candles, on the evening before moving in. He then would call on the demons who lived in that place, imploring them to graciously accept the new inhabitants, the ‘neighbours’ who were preparing to come to live with them. Then he would lock the house with a key and go away. The next morning, he would return with a black rooster, and a shohet [ritual slaughterer] would slaughter the animal in the middle of the building, whether it was a house or a shop, sprinkling the blood in the four corners while saying: ‘Here, we have performed this sacrifice, we have sprinkled you with its blood, you, our good neighbours who live here, so that you will graciously accept those who are coming to love with you as neighbours, in this place, today.’ With the slaughtered rooster they would then make a dish of couscous. All the family would eat it, they would give some to the neighbours to taste, and they would throw a small amount into the well and the cesspool. If someone was building a new house, a rooster would not be sufficient; they would have to sacrifice a black goat, or an ox of the same colour.

Rabbi Messas disapproved of this custom (folk beliefs in things like demons were generally frowned upon by the rabbinic authorities) and attempted to prevent it being practiced, but as he notes, he had to raise the subject in a sermon every year, so people apparently continued to do it. Offering henna to placate the jnun [spirits] is a common theme in both Jewish and non-Jewish culture in North Africa.

An elderly Jewish woman I interviewed remembered a slightly different practice from her childhood in Constantine, Algeria (Sienna 2011, pg. 94):

We would put henna in a new house, on the doorstep; it was prepared the usual way, with tea for a strong colour. We also put the henna in the corners, with honey and milk, in the corners and on the doorstep. This is protective, and it brings prosperity, and it makes sure that the inhabitants are always happy, without strife, that life goes well for them. We would always put henna when changing houses: we would put henna when we entered [the new house].

It was common in general for Maghrebi Jews to mark their homes with the protective symbol of the hamsa in henna. The noted Finnish anthropologist Edvard Westermarck observed seeing hennaed hamsas on the walls of Jewish homes in Fes at the turn of the century, and even included some sketches (1904, pg. 213, and 1926, pg. 123). To me some of them look even like a hanukkiya/menora more than a hamsa:

Now, I wouldn’t recommend hennaing a big hamsa or hanukkiya on your walls anytime soon… Nor do I advise slaughtering a goat (or even just a rooster) over a pile of henna when moving into a new house.

BUT I do think that this Hanukkah is a perfect time to pick up a henna cone to honour the space you live in, celebrate with your neighbours, and welcome in positive energies for the new year.
Enjoy! Happy hennaing, and happy Hanukkah! 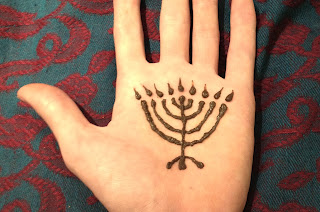 Edvard Westermarck. The Magic Origin of Moorish Designs. The Journal of the Anthropological Institute of Great Britain and Ireland, Vol. 34, 1904.